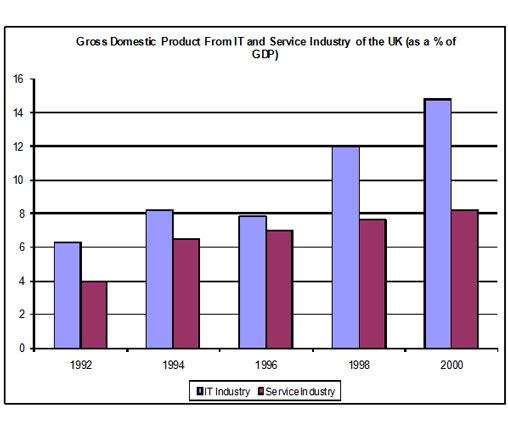 You should spend about 20 minutes on this task.

Summarize the information by selecting and reporting the main features and make comparisons where relevant.

In this question, you are being asked to write a report which describes changes over time, in this case from 1992 to 2000. To do this you need to use language expressing change and appropriate tenses.

In paragraph 1, you should say what the graph shows, but do not copy the language from the question; instead, paraphrase some of the language. For example, instead of writing:

The bar chart compares two major industrial sectors contributing to the UK’s GDP in the period between 1992 and 2000, as a percentage of total GDP.

You should then give an  overview of the graph. What’s the big picture? What’s the most noticeable thing about the chart? I would say it’s the rapid growth of the IT industry, as compared to the steady growth of the services sector. So you could write:

Overall, it can be seen that while both sectors increased as a percentage of total GDP, the IT industry grew at a far more rapid rate when compared to the the services sector.

Writing the main body of the report

Having written the overview, you should now look at the detail. Remember, though, that you only need to write a short report (at least 150 words), so you only need to summarize the most important details.

At the beginning of the period, in 1992, the service industry accounted for 4% of total GDP, whereas IT contributed just over 6 per cent. Over the next four years, both sectors experienced overall growth as a proportion of total GDP, although there was a slight reduction for IT between 1994 and 1996. While IT remained the larger of the two sectors, the gap between them shrank to around 1%, half of what it had been in 1992.

However, after 1996 the growth of the two sectors was noticeably different. The IT sector’s proportion of GDP increased quite sharply to 12% in 1998 and then to nearly 15% in 2000, while that of the service Industry rose only slightly, increasing only marginally from 1998 to 2000.

You could also add a sentence describing the situation in 2000.

At the end of the period, the IT industry’s proportion of total GDP was almost twice that of the service industry.

To get more information and tips, read my article on the IELTS Writing Test.