Many of the students who come to my website and join my courses are stuck at Band 6 or 6.5 for IELTS Writing, and they want to know the answer to this question:

Well, there are 5 key differences between Band 6 essays and Band 7 essays.

In Band 6 essays, some ideas are inadequately developed.

In Band 7 essays, all ideas are developed.

So, to get a Band 7 for Task Response you must make sure that you explain and illustrate all of your ideas (e.g. the reasons for your view, the reasons for the views in a discuss both views essay, the problems, the disadvantages).

If you fail to explain any of your ideas, you will be stuck at Band 6.

In Band 6 essays, there is clear overall progression.

In Band 7 essays, there is clear progression throughout.

Band 6 essays get from A to B, but they might wander around a bit:  some arguments might go in circles, some sentences might repeat something already said.

In Band 7 essays, EVERY sentence adds something new to the essay. There is no repetition.

So, to get a Band 7 for Coherence and Cohesion, EVERY sentence in your essay must have a purpose. Don’t keep repeating yourself, and make sure your argument is clear.

In Band 6 essays, some cohesion is faulty or mechanical.

Band 7 essays tend to use cohesive devices correctly, even though they may be used too often, or not enough.

So if you want to get Band 7 for Coherence and Cohesion, be careful not to make mistakes with transition signals and referencing. Just use transition signals you know well; you don’t need to use ‘advanced’ words like “nevertheless” or “notwithstanding”!

Band 6 essays tend to lack vocabulary which has a precise meaning.

Band 7 essays contain some vocabulary which has a precise meaning.

So, to get a Band 7 for Lexical Resource, select nouns and verbs that have a precise meaning, but also use words in combination, since “traffic congestion” has a more precise meaning than “traffic”.

Band 6 essays tend to use a restricted range of complex grammatical structures, and may rely heavily on complex sentences.

So, to get a Band 7 for Grammatical Range and Accuracy, use these other types of complex grammatical structure. But try to use them accurately, since too many errors could keep you at Band 6.

Here’s a quick summary of these 5 key differences. (Click on the image for a full-size version.) 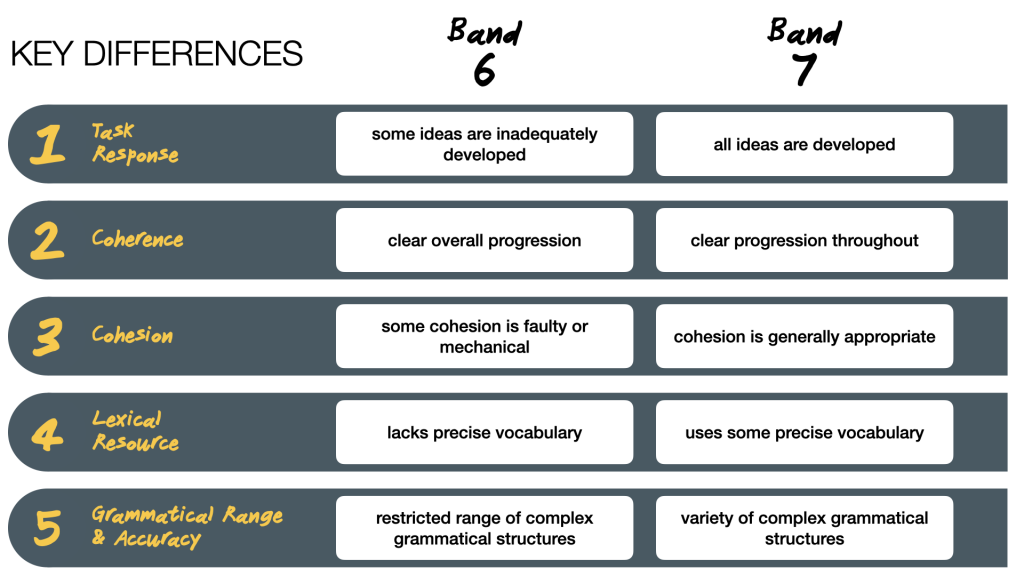 So that’s how to get from Band 6 to Band 7 in IELTS Writing Task 2.

I hope this helps you, and thank you for reading!