One of the main things IELTS examiners look for in your writing are complex grammatical structures.

To get a Band 7 for Grammatical Range and Accuracy, you need to use a “variety of complex structures”.

But what does this mean?

What is a complex structure?

Firstly, what does “complex” mean?

Complex has 2 meanings in English:

(1) complicated, as in “a complex mathematical problem” or “complex machinery”.

(2) consists of more than one part, as in “an apartment complex” 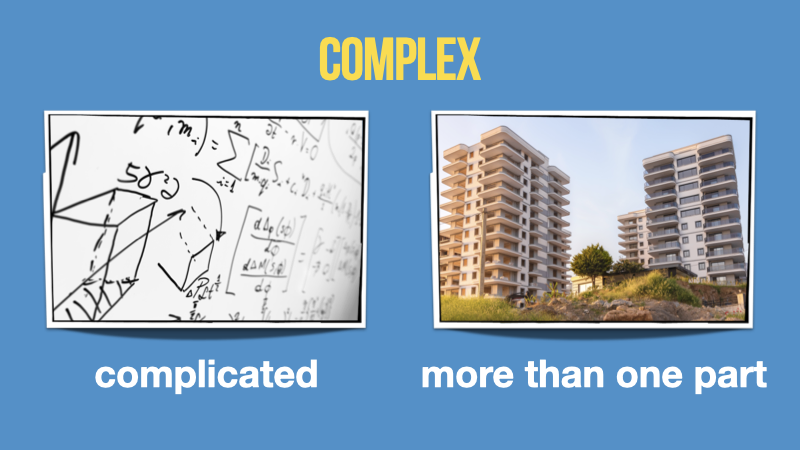 In the phrase “complex grammatical structure”, complex has the second meaning, “more than one part”.

It does NOT mean a complicated grammatical structure!

This is great news! It means you do not need to write long, complex sentences in your essays.

There are lots of different complex grammatical structures you can use in your essays, and using these can help you get Band 7 for Grammatical Range and Accuracy.

The cat sat on the mat

The cat sat on the mat because it was tired.

Many IELTS candidates write lots of complex sentences in their essays, but they still only get Band 6.

Why is that? There are 2 main reasons.

1. You need to complex sentences with some accuracy to get Band 7.

So let’s look at other kinds of complex structure.

One of the best and easiest ways to add complexity to your grammar is by using complex noun phrases.

A noun phrase is a group of words that performs the function of a noun.

A basic noun phrase often has words BEFORE the noun:

A complex noun phrase has words AFTER the noun (and sometimes before the noun as well):

These complex noun phrases are all examples of complex grammatical structures, and these are the kinds of phrases IELTS examiners are looking for when they assess your essays.

If you can use just a few of these in your writing, with SOME accuracy, you stand a great chance of getting a Band 7 for Grammatical Range and Accuracy.

Another type of complex grammatical structure is the complex verb phrase.

A complex verb phrase is a group of words that performs the function of a verb.

There are two common types of complex verb phrase:

The simplest way of creating a complex verb phrase is by using modal verbs:

Modal verbs are great! Not only do they increase the range of your grammar, they ALSO add precision to your vocabulary AND help you to avoid exaggerated claims…so modal verbs can help you get a higher band score for Task Response and Lexical Resource, as well as Grammatical Range and Accuracy!

Another way to create complex verb phrases is to use passive verbs:

You can also use modal verbs and passive verbs together:

Another type of complex grammatical structure is the complex verb pattern.

A complex verb pattern is a verb followed by more than one grammatical item. This is a more advanced structure, so take care if you are only aiming for Band 7!

Here is an example of a complex verb pattern:

In this sentence , the verb “spend” is followed by 2 grammatical items: a noun phrase “their free time” and an ‘-ing’ form “studying”. 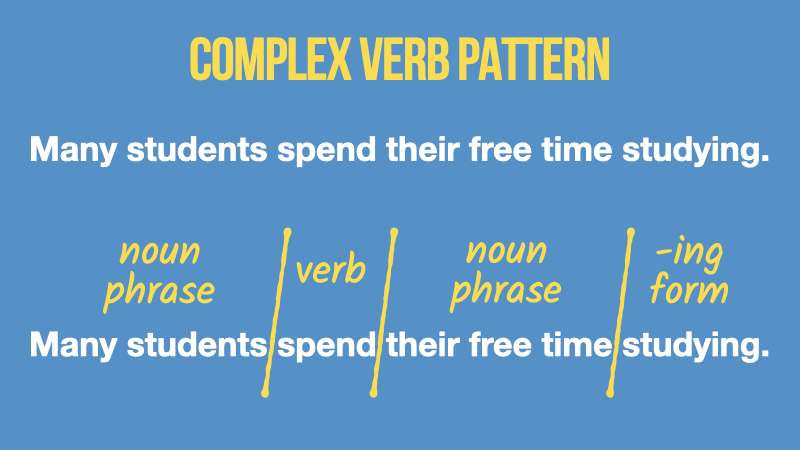 As you can see, these sentences are not long and complicated! But they do use complex grammatical structures.

You may already be using some of these complex structures in your writing. If so, you won’t need to write lots of complex sentences.

Just remember, if you want band 7 or higher, use a VARIETY of complex structures. Not just complex sentences.